Meet Liam: doing his part to put away the bad guys: childhood leukemia 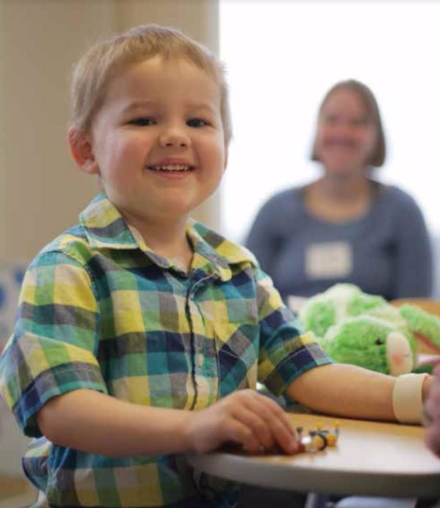 Liam Goble has some big plans. “When I’m bigger, I want to drive a car with sirens on the front and sirens on the back,” he says. “I’ll arrest bad guys and put them in the back of my van, lock the doors and jump right in. Bam!” A diagnosis of acute lymphoblastic leukemia (ALL) threatened to derail those plans.

“I’ll never forget. It was Super Bowl Sunday of 2016 when I decided to take him to an urgent care clinic, expecting to be home by game time with an antibiotic,” Shannon, Liam’s mom, says.

But Liam’s tender, swollen belly quickly changed those plans. Liam followed by his terrified parents Shannon and Charlie, was sped off by ambulance across the river to St. Louis Children’s Hospital, where his treatment for acute lymphoblastic leukemia (ALL) kicked off with a 28-day hospital stay.

Liam, who has been enlisted as the child ambassador for the St. Louis Children’s Hospital Pedal the Cause team, doesn’t have to give up on his dreams, thanks to decades of research that have improved the prognosis for kids his age diagnosed with ALL. Money raised through Pedal the Cause goes directly into cancer research conducted at Siteman Kids at St. Louis Children’s Hospital, the hospital’s pediatric cancer program.

Meanwhile, a Children’s Discovery Institute research grant is providing seed funding for a study on recurrent acute myeloid leukemia (AML), another form of leukemia in children. Its investigators hope to gain as much ground treating AML as they have had with treating ALL. The journal Science Translational Medicine recently published a study showing promise for immunotherapy in treating recurrent AML in adults. The study’s lead author, Rizwan Romee, MD, and senior author, Todd Fehniger, MD, PhD, from the division of oncology at Washington University School of Medicine, barely let the ink dry before they were on to their next challenge. In collaboration with Jeffrey Bednarski, MD. PhD, pediatrics, they received funding from the Children’s Discovery Institute to pursue the same study in children.

Drs. Romee and Fehniger explain that their small, phase 1, “first in human” clinical trial provides evidence that the immune system’s “natural killer” (NK) cells can be dialed up in the laboratory, trained to recall that activation and then be unleashed to destroy cancer cells in some patients. Responses to the treatment were observed in five of the nine patients that could be evaluated.

Everyone has NK cells in their body. The fact that they have a tendency to pounce and kill AML cells make them of special interest.  They were discovered in the 1970s by two groups of researchers in the United States and Scandinavia. Since then, much effort has gone into understanding their biology and ways to put them to better use.

“It wasn’t until recently that we figured out some new ways to train these cells and make them better at responding to leukemia cells,” says Dr. Bednarski. “So, with Rizwan and Todd’s discovery, and support from the CDI, the next chapter of NK cell biology starts right here at the School of Medicine.”

“We have several steps to take and a significant amount of data to gather before we can say we are ready to try this therapy in children with AML,” explains Dr. Bednarski, “but given the fact that I have several patients who could potentially benefit from immunotherapy of this kind, we all feel a sense of urgency to pursue this research.”

The Goble family has been back and forth for maintenance treatment, scans and procedures – including lumbar punctures that Liam handles bravely – for more than a year. But that hasn’t stopped Liam from doing everything he’s always enjoyed, chief among them, riding his police motorcycle around the neighborhood. Also on Liam’s favorites list is anything having to do with Blaze and the Monster Machines, mixing it up with a little Paw Patrol every now and then.

From the Summer 2017 issue of Guardians Magazine, a publication of St. Louis Children’s Hospital. 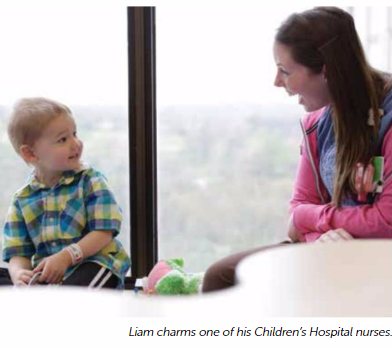